In 1911, J.K. Daniels sculpted the Fair's first butter cow and was succeeded by J.E. Wallace of Florida. In 1957, Earl Frank Dutt of Illinois took over the sculpting duties. Norma “Duffy” Lyon of Toledo, Iowa, began sculpting in 1960, becoming the fourth person and first woman to sculpt the Fair's butter beauties.

In 2006, after 15 years of apprenticing with Duffy, Sarah Pratt of West Des Moines became the Fair's fifth butter sculptor. In addition to her first Butter Cow, Pratt also crafted Superman of Superman Returns (Norwalk, Iowa, native Brandon Routh, who starred as the Man of Steel) and "Mr. State Fair" Bill Riley (in honor of his 60th Fair). 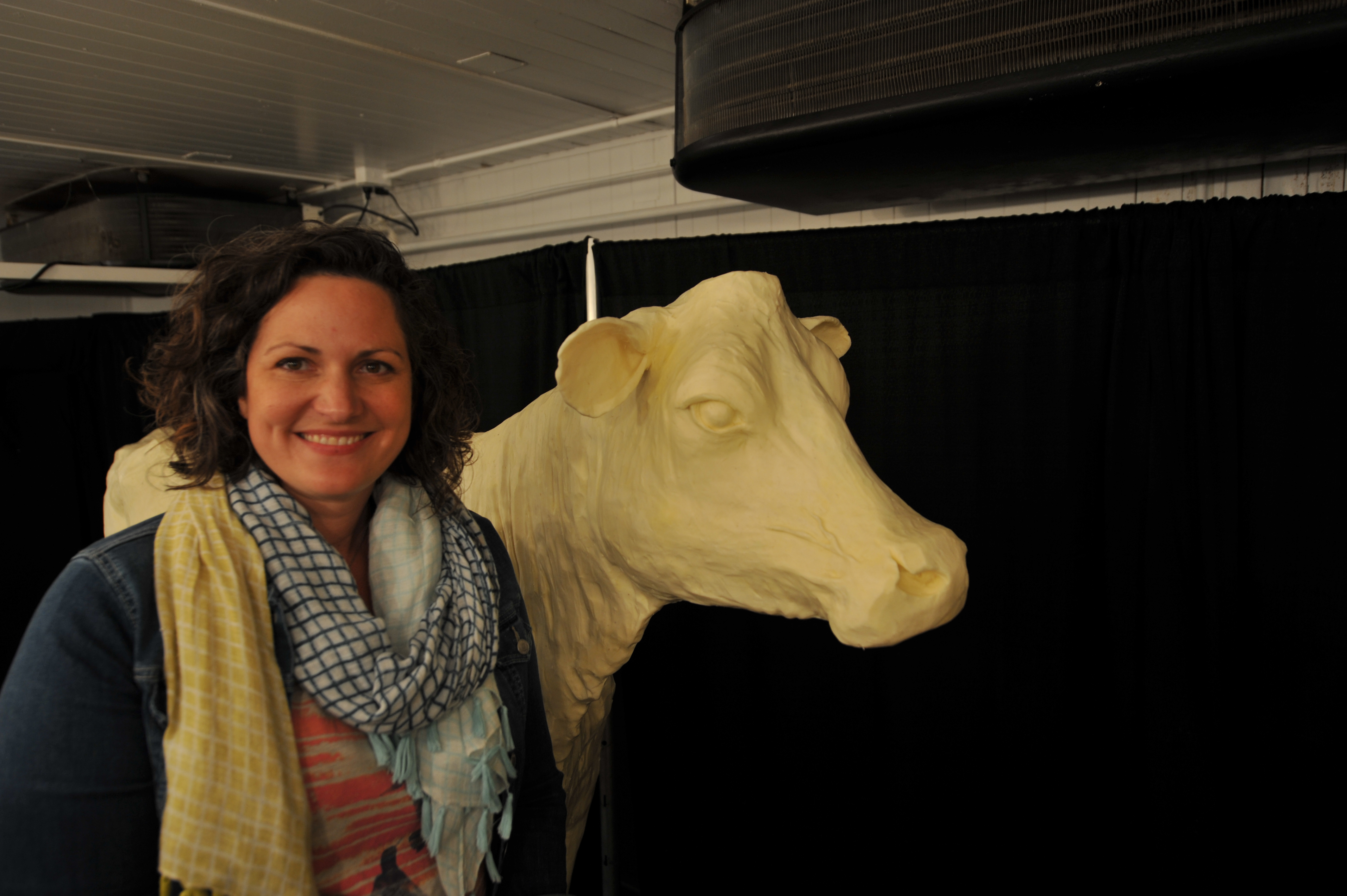 The Butter Cow starts with a wood, metal, wire and steel mesh frame and about 600 lbs. of low moisture, pure cream Iowa butter. Once inside the 40-degree cooler, layers of butter are applied until a life-size butter cow emerges - measuring about 5-1/2-ft high and 8-ft long. Each year, much of the butter is recycled and can be reused for up to 10 years.

A real dairy cow weighs more than 1,000 pounds, but the butter version comes in at around 600 pounds. Did you know the butter cow would butter about 19,200 slices of toast and take an average person two lifetimes to consume?

In addition to the Butter Cow, a companion sculpture also graces the Agriculture Building coolers.

About the 2022 Butter Cow and Companion Sculpture

"76 Trombones" is definitely a memorable song and perhaps the first that comes to mind when thinking about "The Music Man." Sculptor Sarah Pratt's own "music man" remembers playing in the pit orchestra in his high school's production of "The Music Man." Since Andy plays the trombone, the trombone player will be modeled after him.

Drew Minard is the only Iowan in the current Broadway revival of "The Music Man."

As research for the sculpture, Sarah and her sister, Megan Doyle, took her daughters and apprentices Hannah and Grace to New York City to watch the Broadway revival. The show was high energy and thoroughly delightful.

They were excited to meet Drew Minard and returned to sculpting with an energy injected with the enthusiasm of this latest revival of the American classic.

Mason City is the hometown of the famous musician, composer, playwright and writer. Born in 1902, Meredith Willson would be 120 years old this year.

Willson is best known for his smash hit, "The Music Man." The musical opened on Broadway in 1957, 65 years ago, and was inspired by his boyhood experiences in Iowa.

Enjoy the 1912 replica streetscape, just like the 1962 movie version of "The Music Man" and even visit the ice cream parlor.

Meredith Willson played the flute and piccalo, which were delivered to him in Mason City...you guessed it, on the Wells Fargo Wagon.

The piccalo player in the butter sculpture is the likeness of Meredith Willson.